June 20th-26th 2022 marks Children’s Hospice Week – a time to call attention to the palliative and hospice care services in the UK that support children with life-limiting illnesses.

The goal of Children’s Hospice Week raises funds and awareness for the support structures that exist here: not only for seriously ill children, but their families. This year, the theme is #ForTheChildren.

Yet crucially, Children’s Hospice Week is also about understanding – helping a wider audience develop their knowledge of hospice care, and how the services we provide enhance life-limited children’s’ quality of life.

At ellenor, we take a holistic approach to care. That means looking at the children we support – be they our patient, or have lost a loved one under our care – through a wider lens. It means understanding these children’s’ emotional and social needs, and how they interact – and communicate – with their parents and siblings.

It means not only listening to the child, but giving them a voice. The tools with which to express their feelings: to articulate grief. It’s empowering them with the ability to have those difficult conversations through a medium they understand and feel comfortable with.

We’re talking, here, about play. So how can play serve a constructive purpose in helping children come to terms with a bereavement, or find an outlet for challenging emotions?

Play therapy is a therapeutic approach for helping children explore distressing or painful experiences. Rather than having to force their feelings through the restrictive funnel of speech, children can channel the use of a range of non-verbal tools and techniques: such as toys, equipment, and a trusting relationship with the therapist.

“Adults have access to counselling, but it’s very difficult for a child to express their feelings – and resolve trauma – in words. Sometimes a small child won’t even have the words to use. And for the children that do, it still may be very difficult to make sense of everything that’s going on.

“Play therapy is about helping children communicate in a safe environment. The toys are the children’s words; the play is their language.”

While the parent may, in rare cases, be involved – typically only if the child is very anxious to participate – play therapy usually involves a series of one-to-one sessions with the child alone. 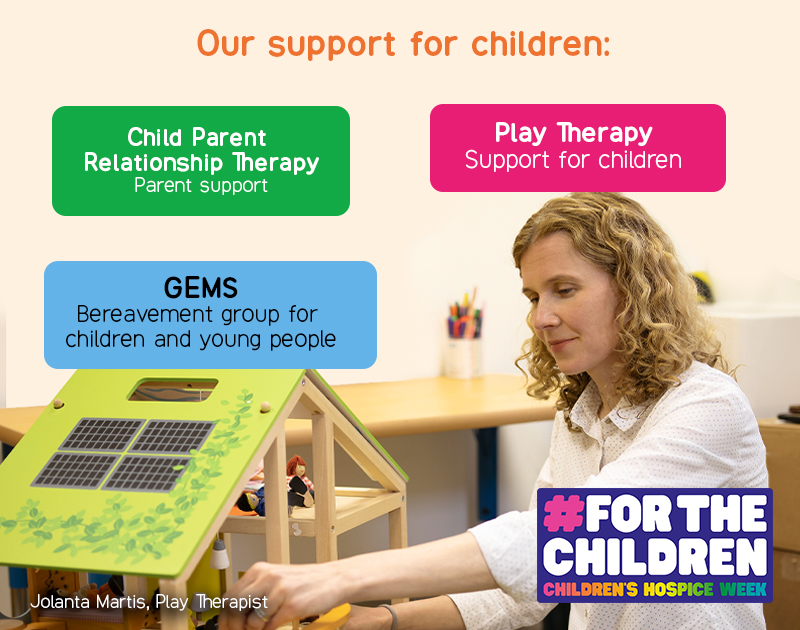 However, we’re also helping pioneer a play-based intervention that involves the parent, too – child/parent relationship therapy.

In this approach – which consists of ten sessions with Jola – the parent records one play session a week with their child. Jola then analyses what the child is attempting to communicate through play, and unpacks it with the parent. As Jola herself explains, it’s about empowering the parent to understand their child. And equipping them with the tools to leverage lasting change.

“I want parents to be therapeutic agents of change for their child. To feel like they did it – that they contributed to their child’s development, and to the relationship.”

Child-parent relationship therapy (which, at ellenor, was developed during the coronavirus pandemic) helps facilitate the difficult conversations parents must have with their children – particularly when they concern death and dying.

After all, no one is really prepared to have a conversation with a child to tell them their life is ending. Or that they won’t see their Daddy, or their sister, or their Grandpa again.

But despite the often challenging, highly emotionally charged environment of these sessions, the overwhelming theme is resilience; the overall result, strength.

Because our child-relationship therapy allows parents to see their child from another perspective; in a new light. To see the strength and positivity in that treasured relationship, and that the ‘problems’ were never really that at all.

Let’s come back to Children’s Hospice Week, for a moment. Is one week really enough? Part of the reason play therapy and child-parent adult relationship counselling exist, after all, is because we – as a society – find it so difficult to talk to our children about death.

We’d rather shirk those conversations. Delay them, or – in some cases – avoid them altogether. Not out of malice for our children, of course, but out of protection. To safeguard them from the pain and suffering.

But what if we flipped that misconception – that involving our children in those difficult conversations about death and serious illness is harmful to them – on its head? What if we reframed it to realise that, actually, children would like to have those conversations? To be included; to be part of the process, rather than overhearing or inferring it?

Play therapy and child-relationship counselling are valuable tools for engaging with our children – particularly those living with a life-limiting condition, or through grief and bereavement. But to really understand them – to empower and lift them up – we need openness and honesty. Particularly when death, dying, and hospice care are in the conversation.

So this June, help us help you to speak up and out about children’s hospice care. To explore and share the infrastructure that exists – of which we’re a part – to help brave, brilliant children with life-limited conditions (and their families) live and thrive.

What we do, we do #ForTheChildren. This year, join us.