Donations are pouring in after 11-year-old Dylan Cone signed up for a mini marathon to raise vital funds for the hospice charity helping his little brother.

He was inspired to take part in the challenge by ellenor, which has supported the whole family since four-year-old Zac was diagnosed with a brain tumour. Dylan has been amazed to see online donations soar up to nearly £4,000 – way over his original £500 target.

The mini marathon, led by ellenor’s mascot Ellie, is being held at the Gravesend Cyclopark on March 13 and is open to all five to 16-year-olds.

Dylan’s mother Karen Staples said: “We’re really, really blown away and so grateful for everyone’s generosity and support. Dylan gets so excited when he sees the JustGiving page and how much money has already come in.”

Zac’s diagnosis last March came as a shock to his parents Karen and Luke. Karen noticed he was very drowsy and withdrawn and was sick a few times in the morning. She had taken him to see their GP who had ordered blood tests, but the following day Karen became more concerned and took Zac to A&E, where a CT scan revealed a very large tumour. He was taken by ambulance to Kings Hospital for an emergency operation to relieve the hydrocephalus that had developed.

Karen said: “Dylan came home from school that night and didn’t see his brother for a month. The impact has been so great, but he is such a wonderful boy – they are both special.

“Since Zac’s diagnosis it has been a nightmare – it’s really been a horrific 11 months. Now we are just trying to enjoy the good days we have with him.

“His tumour is an ETMR (ebryonal tumour with multi-layered rosettes). It is a very rare, aggressive tumour occurring in under fours.  I don't have exact numbers, but I only know of a handful of cases in the UK.

“We have recently been told his tumour has relapsed and we are devastated. We have exhausted all avenues of treatment.”

Since his diagnosis Zac has spent four weeks in Kings College Hospital having three surgeries to remove the tumour. Later the family was based at the Christie Hospital in Manchester for six weeks so Zac could receive 30 sessions of proton beam therapy, a less damaging radiotherapy particularly suitable for developing brains.

Between September and December, Zac was an inpatient at the Royal Marsden Hospital for three weeks out of every four having high dose chemotherapy with stem cell transplant.

Karen said: “Obviously Covid made everything so much more difficult. We have had to juggle things all the time. Only one parent could be with Zac at a time, so myself and my husband Luke took it in turns, with one of us staying at home with Dylan. Sometimes Dylan would also be with his dad.”

Karen and Luke’s employers have been supportive during Zac’s illness, and both have been able to stay at home and care for their son and accompany him on his hospital stays.

Zac finished his aggressive round of chemotherapy just before Christmas and the family found out at the end of last year that the tumour had sadly returned.

Karen said: “Zac has a very aggressive type of cancer. To be able to have him spend his last days at home with us is so important -- and it has only been possible because of the ellenor nurses. ellenor has helped us so much – we’re glad we can show our appreciation in this way. Dylan has been having play therapy and I have had counselling. They really are supporting all of us – not just Zac.”

“We appreciate all of it. Until Zac became ill, we didn’t really realise how much ellenor does for families like us.”

Dylan’s main passion is building Lego and the whole family was recently able to spend two days at Legoland. 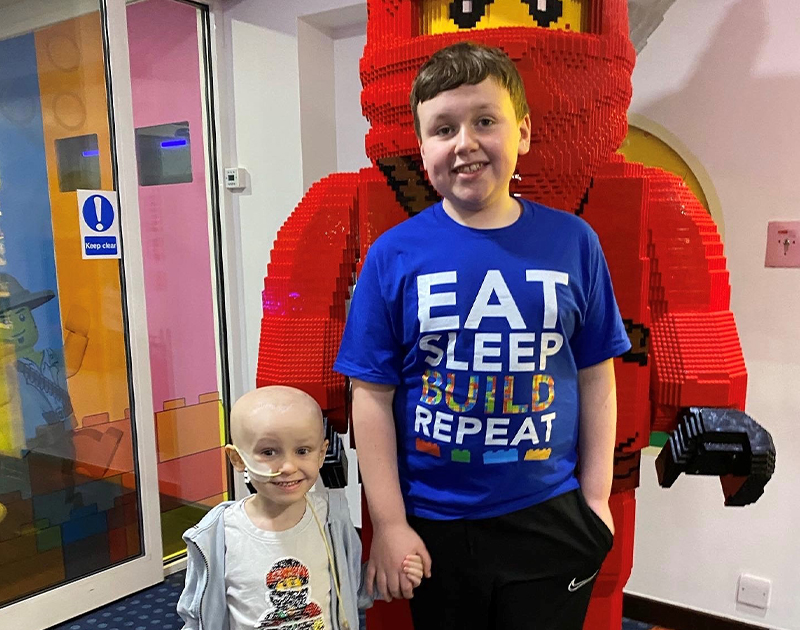 Karen said: “It was great as Dylan has missed out on so many things with us being at the hospital so much, especially during the school holidays.

“Dylan and Zac have such a close relationship and always think of each other. If one of them is given something they always want to make sure their brother has the same. Dylan even wanted to spend some of his Christmas and birthday money on Zac.

“In a way we have tried to compartmentalise things for Dylan. We don’t just want him to be the brother of a cancer patient. At school he can get away from that, and he’s doing really well there. At home we do our best to be quite open with him and involve him in Zac’s care, but in an age-appropriate way. We make him part of it.”

Dylan has been preparing for the mini marathon by walking around his home village of Istead Rise with his mum. He has support from Karen and his stepdad Luke, as well as his dad and stepmum and all his grandparents. The family hopes that on the day of the event they will all be there -- and proud little brother Zac will cheer him on.

You can support Dylan by clicking the button below and heading over to his JustGiving Page.