We celebrate Her Majesty’s zest for life

We are pulling out all the stops to ensure patients, carers and staff celebrate The Queen’s Platinum Jubilee in style.

Festivities at the hospice in Northfleet during the week leading up to the Jubilee include a tea party with music and traditional garden games, and a tree planting ceremony. There will also be a preview of a special song being written by professional musicians in collaboration with patients – and supporters are being encouraged to turn their own garden and street parties into fundraisers.

Operational Wellbeing Lead Andy Lowden said: “The Queen has shown us how to live life to the fullest and how to make a difference. We are acknowledging this huge event, her Platinum Jubilee, with our own celebrations here.”

It was recently announced that ellenor would be one of a select number of organisations to be featured in The Official Platinum Jubilee Pageant Commemorative Album published by St James’s House.

Andy said everyone involved with the hospice felt honoured ellenor would be part of the album, especially as the charity’s ethos mirrors The Queen’s own zest for life.

His department’s plans to hold a jubilee party on Wednesday June 1 for patients, carers and people who attend their open access groups has escalated into a right Royal occasion. There will be a sit-down lunch, 50s songs performed live by Gravesend Theatre Guild, dancing, skittles and croquet on the hospice lawn. For classic car enthusiasts, there will even be a display of Morris Minors.

Andy said: “It will be a bit like a traditional fete, all provided free of charge by ellenor. We are encouraging people to wear red, white and blue or anything 50s style. The tables will be decorated with Union flags and there will be bunting. We are compiling a 50s music playlist and there will be a coconut shy, hook a duck and popcorn.

“We are inviting our Living Well patients and people on the hospice ward – including carers. We also want to welcome people who attend our open access classes like seated exercise and gardening. They will all receive their own box of food from the catering team.

“This is an example of the hospice coming together to deliver something – it’s not just one department, it’s all of ellenor pulling together to help patients celebrate the jubilee.”

One of the highlights of the party will be the first public performance of ellenor’s own song. Thanks to funding from the British Arts Council, the hospice has been working with Live Music Now. Professional musicians have been helping patients create a song that reflects The Queen’s long reign but also celebrates life itself. The song will also be recorded later, and a professional video created.

Andy said: “It will be a song about celebrating life because that is what we do at ellenor, particularly in Wellbeing. It will be a special piece of music with some real meaning, which we can use as our theme for many years to come.”

Patients are very much involved in the preparations. Some will be making bunting, paper flowers and wind chimes in arts and crafts classes in the lead-up to the party.

Andy said: “The party will be a great opportunity for Living Well patients and people who attend our open access classes to come together and meet each other, talk and share experiences. Once they get chatting to people who come in on different days they are often surprised by the variety of activities on offer. They will also get to meet people behind the scenes, like the fundraising team.” 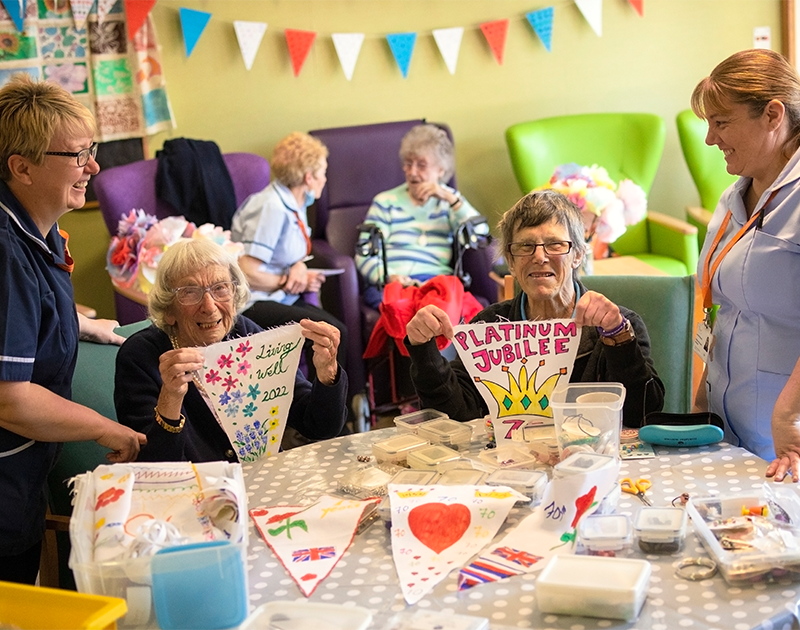 Fundraisers are encouraging corporate sponsors to send their staff along to help as volunteers on the day and ellenor’s own staff are welcome to join in the festivities in the afternoon. Everyone will be encouraged to dress for the occasion, and hospice nurses are hoping to convert their uniforms into something a bit more traditional for the occasion.

A plaque in honour of the Jubilee will also be presented by Dartford firm Stanbridge Ltd, who are providing a Cherry Blossom tree as part of the Queen’s Green Canopy initiative. It will be planted into a big pot, ready to have pride of place once the new hospice garden is created following the upcoming redevelopment of the Northfleet site.

Senior Supporter Engagement Officer Jemma Kemp said: “The party has turned into a team event for ellenor. We have been able to help the Wellbeing department by using our relationships with local businesses to source items such as tables and chairs. We have also been able to advise on the planning of the event – as that’s what we do!"

“This has been a real team effort instigated by the Wellbeing department and  is also an opportunity for staff and our key supporters to celebrate this momentous occasion alongside our patients.”

Supporters who would like to use their own celebrations to raise vital funds for the charity are able to register for a Jubilee Fundraising Pack with downloadable materials like bunting and cake toppers from the ellenor website. Events can be anything from a street party or big jubilee lunch to a barbecue in the garden for family and friends.

Jemma said: “Quite often people running their own events feel it’s the ideal opportunity to do  so in aid of a good cause. Guests often offer to contribute,  therefore we have provided some additional resources to help support them, to support us.”

ellenor – A brand showcased in Her Majesty The Queen: The Official Platinum Jubilee Pageant Commemorative Album.