My son Jack spent his last Christmas at home with us - because ellenor were there for him.

This Christmas, please help ellenor to care for other life-limited children in our community.

Jack died of cancer in January this year. He was just 15. I want to tell you a little about him – and about the care and support ellenor gave him when he needed it most. Because of them, Jack was able to come home from hospital for two days last Christmas and – as he kept telling us – it was his “Best Christmas Ever”.

Jack was only two when he was first diagnosed with cancer, a neuroblastoma (a tumour on his kidney). After tests and scans we went into Great Ormond Street Hospital in London – and then back home with the support of ellenor’s nurses. For over a year he had lots of treatments and, when he was three and a half, they declared him ‘cancer free’. We said farewell and thanks to ellenor. We all thought we’d got away with it. 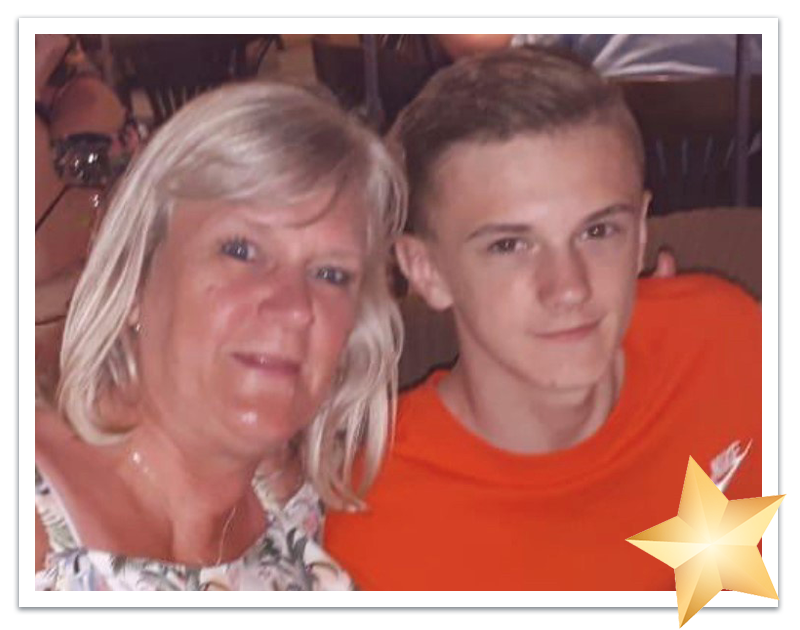 Jack grew up a healthy, happy boy. I know all parents say this about their kids, but he was such a wonderful lad. Very kind, always the first to help someone who needed it, right from when he was very small. He always stood up for what was right, never hesitated to give his opinion. He was very intelligent, loved school, loved learning (he’d study subjects the night before, so he already knew what was being taught the next day!).

As with all schoolchildren, the pandemic kept him at home for the second half of last year. Jack studied hard, never missed a lesson. But he started complaining of backache. We thought it might be the chair he sat in for school at home in front of his computer, and we tried a few things. But the pain got worse and worse – so we went to see an osteopath who thought there might be a problem. I took Jack straight to the hospital where they ran some tests.

The tests came back in August. Jack had a new, different cancer on his spine. The hospital immediately started treatment, but we soon discovered it wasn’t having the affect they had hoped. By the time they started an alternative treatment the cancer had spread throughout his body. There was no cure, nothing they could do. We were told he had just months left.

Jack’s determination to keep living life, even after this news, was incredible, humbling, and inspiring. He got straight back into his schoolwork – even managed to go back in person for two days in early September. But, as the cancer spread and his pain worsened, he went back into hospital; we thought he might never come out.

Now, to be honest our family has never been all that bothered about Christmas. We celebrate it, we love seeing family – but we don’t go over the top, we never have. Jack felt the same, he’d never worried too much about presents and decorations. But he was a bright lad – and he knew that Christmas 2020 would be his last. He asked to come home.

And that’s when ellenor came back into Jack’s life, 13 years later. Their amazing nurses, put together a rota to give Jack the support he would need. Jack came home on Christmas Eve and ellenor came to install his syringe driver (a pump giving him constant supply of morphine). They settled him in and told us they would come back at any time, all over Christmas. I can’t tell you how massive a relief that was, knowing I had them there on the end of a phone.

We woke up together on Christmas day; me, Jack, and his sisters. We ate food, played games, watched some telly. Friends and family came by – singing carols to us through the open window. In the afternoon Jack was struggling with his pain and so we called ellenor and they came straight over, checked all of Jack’s vital signs and increased the morphine dosage a little, which did the trick. They left us alone again for the evening. Jack couldn’t move around but he just sat quietly, watching us fuss about him. He kept telling us, “This is the Best Christmas Ever!” And it was.

Jack was able to come home three times, all with care from ellenor nurses. In January he went back to hospital – and he stayed there until he passed away, peacefully, a few days into January.

This Christmas is going to be really, really hard. Shelley, Lucy, and I will be together, but it won’t be the same without our Jack, it never will be again. But we had that one last Christmas together, we have the memories of those two precious days. And those days, those memories, were made possible by ellenor.

I’m here sharing Jack’s story with you because I’m hoping it will inspire you to support ellenor this Christmas – so that they can give the same care to other children this year. They care for children of all ages, some with long-standing conditions lasting years, others with sudden cancers like Jack. But they are all children; they all need the care that only ellenor can offer – especially at Christmas.

I’ve been told that a home visit by the ellenor nursing team, over the Christmas period costs £39.55. It costs £1,200 for one syringe driver, like the one Jack used at home. Each day, it costs £296.63 to fund an ellenor Children’s community nurses. 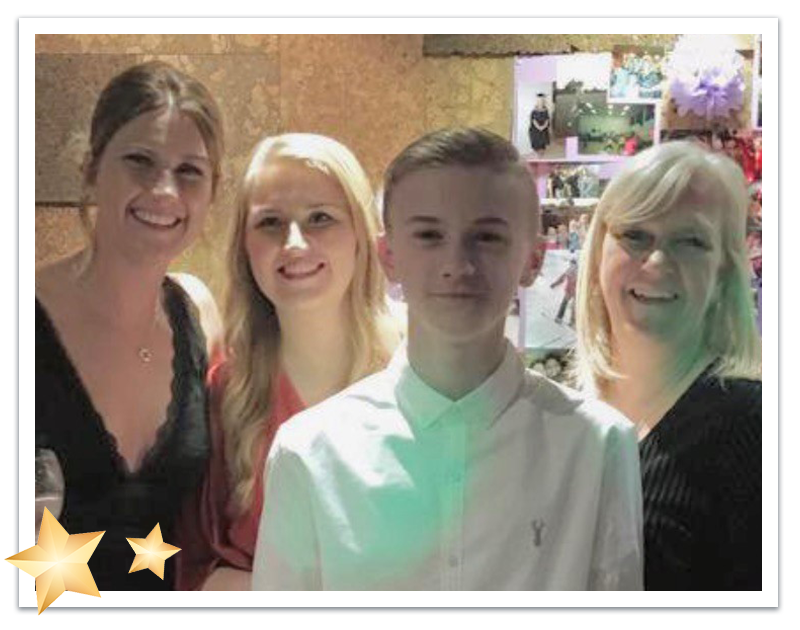 Please, support ellenor this year with whatever you can manage. I know for most people Christmas will be a huge occasion, with families able to gather like we couldn’t do last year. But for me and my girls, the best thing for us will be knowing that Jack has helped others in need one last time – by helping to raise money for this wonderful charity.

Thank you, from us all, for anything you give. We wish you a happy, wonderful Christmas full of laughter with the people you love.

I’m Tina, one of the Children’s Community Nurse Specialists here at ellenor. I’ve been here for a little over four years. It’s my role to
go out into our community and provide expert nursing care to children and young people leading really challenging lives, coping with really serious medical conditions. I’m there to help these children manage their illnesses so they can share moments of fun, play and just
normality – which they often find so hard to achieve. 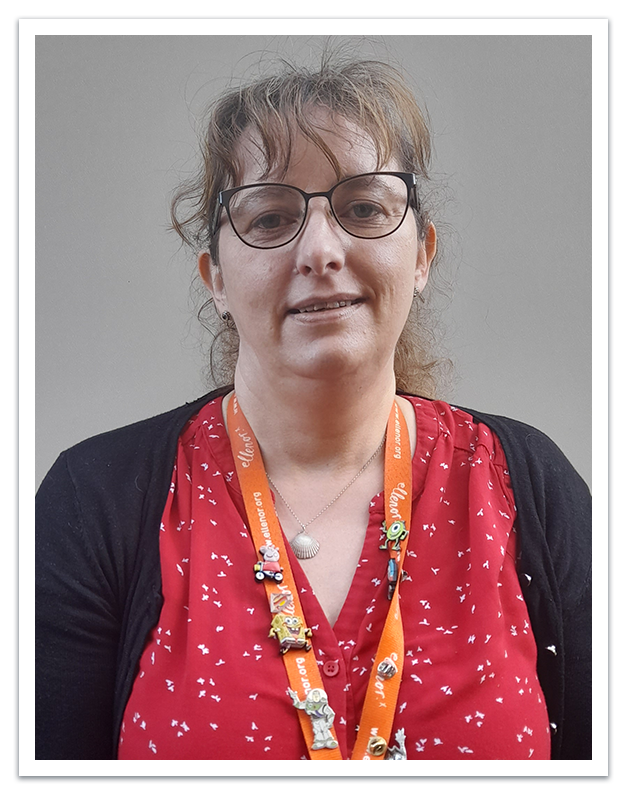 I was part of the team that was lucky enough to know Jack and his family last Christmas, just for the couple of days he managed at home. We arranged a rota between us to make sure there was always someone on-call; because we knew in all likelihood Jack was going to need us over Christmas.

We set up his syringe driver on Christmas Eve and then visited him again on Christmas Day itself. With Jack I’m happy to say that with our input he was able to stay at home over Christmas I know how important it was for him, his mum and sisters to have Christmas together – and we were able to help them have that.

When I tell people I meet what I do for a living they’ll often say, “Oh, I don’t know how you could do that.” But, honestly, it’s a complete privilege. It’s an honour to be allowed into these families’ lives – even if just for a very short time. It’s a difficult, emotional job – but we all love it.

Our team don’t see working over Christmas as a huge sacrifice. We all make Christmas work around our shifts, we’ll have Christmas dinner and present swapping later on, or even celebrate on Boxing Day if that’s what’s needed. Putting a family who are celebrating their last Christmas together before our own plans is an easy decision; I’m sure if you were in my shoes, you’d do the same.

If you can support Pauline and Jack’s appeal this year, we’ll all be extremely grateful to you. There’s not a member of staff here who doesn’t realise and appreciate your donations and support. We can’t care for children and families without you. So, thank you for anything you are able to give this year – oh, and if you could please send back your message on your bauble decoration, I’ll make sure it goes up on the tree!

Have a lovely Christmas, with best wishes from us all.
Tina

Send a message of love this Christmas

Print out and write a message of love on an ellenor bauble.

Make your donation online now, rather than using the postal form.